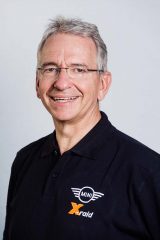 was born in June 1956 and graduated from the University of Munich with a degree in Business Administration in 1985.

Even while he was studying, he was already investing in various start-ups. In 1985, he launched his professional career in M&A division of the Matuschka Group in Munich. In 1989, he moved to South Africa with Bayerische Vereinsbank, where he was responsible for establishing the M&A division. As well as various mandates, including as a member of the administrative board of Bankhaus Wölbern & Co. and member of the advisory board of Montana Tech Components AG, Sven Quandt has also sat on the supervisory board of VARTA AG since 2016, having previously held a position on the supervisory board from 1979 to 2000. Even at the start of his career, he leant towards the automobile sector. In 1989, together with two partners, he founded various supply companies, including WET of North America Ltd and Schukra of North America Ltd. in Canada, which went on to become a global market leader in the field of lumbar supports.

Sven Quandt’s motorsport career began in 1991. He successfully combined his economic experience and his passion for motorsport. He has enjoyed success, not only as a businessman, but also as a co-driver and driver.

In 1998, Sven Quandt won the T1 Marathon World Cup in a Mitsubishi Pajero. He later enjoyed more success as a team principal, initially as head of motorsport at Mitsubishi Motors Motorsport GmbH from 2002 to the end of 2004. Under his leadership, Mitsubishi won the Dakar rally in 2003 and 2004. Parallel to this, he also launched X-raid GmbH in 2002. After outings with the BMW X5 and X3, the team from Trebur has run the MINI Countryman since 2010 and the two-wheel drive MINI JCW Buggy since 2017.

The Dakar victories in 2003 and 2004 with Mitsubishi, the success with the MINI in South America from 2012 to 2015, and the two wins in Saudi Arabia (2020, 2021) have made Sven Quandt the only team principal/team manager to win the Dakar in Africa, South America and on the Arabian Peninsula with one team. In total, he has been responsible, as team principal, for eight victories at the iconic Dakar Rally and over ten World Cup titles in cross-country motorsport.

In 2017, Sven Quandt was back behind the wheel, as he strived to establish the Side by Side class he supported on the motorsport scene. With third place in the first race and victory the following year, he showed the potential of this vehicle class. X-raid can now call on all that know-how and experience when developing the Yamaha YXZ1000R with Yamaha.

Alongside his role as team principal at rallies and Managing Director of X-raid GmbH, he is also largely responsible for the development of the cars within the X-raid team. After the hugely successful four-wheel drive MINI ALL4 Racing and MINI JCW Rally, Quandt launched the MINI JCW Buggy. The first two-wheel car in the history of X-raid was unveiled in autumn 2017 after a project and development period of just seven months.

As well as his role as Managing Director, Sven Quandt is also responsible for Technical aspects, including Development, as well as the Company’s Strategic Orientation. He also represents the team’s interests on various committees, including within the FIA.

was born in 1982, graduated as a Bachelor of Science in General Management (Track Business Law) from the European Business School in Oestrich-Winkel in 2007, and is a “Certified Professional for Renewable Energy Finance (CPREF)” of the Frankfurt School of Finance & Management since 2009.

As well as various internships in the automotive sector, including DaimlerChrysler UK, Pirelli Deutschland and Mitsubishi Motors Motorsport, he was a co-founder of NyConTec Energy GmbH in 2005 – a start-up with focus on Energy Contracting and solar energy / photovoltaic projects. Already besides his studies, he was responsible for Marketing, IT and Investor Relations for NyConTec, before the company was taken over in 2008 by Kofler Energies AG, which was founded by Georg Kofler.

Thomas then started at X-raid in 2009. As well as marketing and media, he also built up and was responsible for the sponsorship side. Already in the first years, he was able to acquire such renowned partners as Monster Energy, Total and Red Bull for the team. Together with international and national brands, Thomas Quandt also developed local activation concepts, which became important elements of these partnerships – e.g. from Delta Q in Portugal,  Axion Energy or Shell in Argentina, to Primax Peru and other sponsors in South America.

As CMO and CFO of X-raid, Thomas Quandt is responsible for Marketing, Media and Press, as well as Finance and administrative areas.

did an internship in X-raid during his studies and gained his first experience of the Dakar on African soil. Since 2009, he has then been an integral part of the team. After various divisions alongside workshop management, he has gradually taken over the Operational activities.

Tobias Quandt has been COO of X-raid since 2015. As well as Operational activities, he is also responsible for Purchasing, Logistics, HR and IT, as well as Customer Racing.